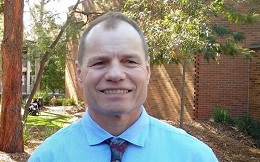 Don started his engineering career in 1984 as a State Rail Authority Cadet Engineer, working on railway rolling stock. He graduated from the UTS in 1989 with a Bachelor of Engineering. In 1991 he graduated from the UNSW with a Masters of Engineering Science (majoring in telecommunications). In 1991 he moved into the communications group within State Rail. Working in design as well as the Train Radio Project. He moved into regional engineering positions at Cootamundra and eventually ended up in Newcastle. In 2004 he moved to ARTC working as a wayside systems engineer. In 2006 he started teaching full time at TAFE. He graduated with a Bachelor of Education (honours) in 2007. He started working at Ausgrid in 2010 as part of the Substations Earthing team, where he is today.

In addition to this he was an Army Reservist for nine years, starting as a sapper and finishing as lieutenant in the Royal Australian Engineers.

Don’s other interests include swimming, running and martial arts. He enjoys spending time with family and skiing.